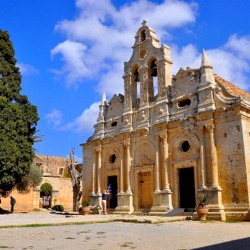 Crete's monastic heritage is immense and reflects the passion with which the Cretans have celebrated their Orthodoxy for over 1600 years. Approximately 97% of the inhabitants of Crete belong to the Greek Orthodox religion. 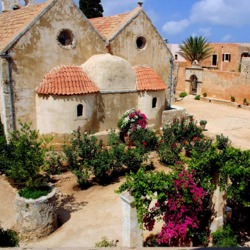 Monks and Nuns still practice a monastic life in hundreds of Monasteries and Convents around Crete. Visitors are welcome to visit most of the monasteries and convents and visiting hours are normally displayed near the entrance to the monastery.

According to the inscription, which has been preserved on the frontal support of the belfry, the church was built in 1587 that is during the period of the Venetian occupation on Crete. This explains the plethora of architectural elements of the Renaissance, which the visitor will notice at first sight. The impressing facade of the church is divided into two sections. The lower section reveals four pairs of columns of Gothic style with Roman elements.

Above the Corinthian capitals of the columns a Corinthian entablature can be seen, whilst in between the columns there are three semi-circular arches supported by pilasters. The two corner arches include a circular opening in the centre, the perimeter of which is ornamented with an anthemion.

The second section of the facade, that which is extending above the Corinthian entablature, includes a variety of mouldings and ellipsoid openings which are set exactly above the circular openings of the lower section. The belfry towers over the centre of the upper part of the facade, whilst the corners are ornamented with two Gothic pinnacles.

The monastery of ‘Toplou’ or of the Virgin Mary of the Cape ‘Panagia Akrotiriani’ constitutes the most important fortified monastic complex of northeastern Crete, with an imposing bell-tower decorated in renaissance style rising on its western side, above the main gate.

This impressive monastic complex – which up to this day operates as a male monastery – was developed gradually from the 14th century onwards and, as confirmed by archival sources, gradually developed into a vibrant convent of great spiritual radiance from the 15th century onwards. The monastery is built around a courtyard on three floors with ramparts, covering an area of approximately 800 square meters. Its construction took place in the last years of Venetian rule, when the upcoming Turkish threat was obvious.

The facade has a pediment of Renaissance style, and bears an engraved founding inscription of Abbot Gabriel Pantogalos written in elegiac couplets. The altar-screen of the catholicon is also notable, housing remarkable Byzantine icons. The monastery has two successive entrance gates. Passing through the great outer gate one reaches the outer courtyard. The places for the activities that needed to be carried out in a fortified space can be seen there. The outer gate was at the end of a vaulted gallery. The second gate leading to the main monastery building is called ‘gate of the wheel’. It was very heavy and not easily opened. It took its name from one wheel which was there to facilitate the monk who was responsible for opening and closing it. Just above this gate is the ‘katachytra’ or ‘murderer’s hole’, which was used to throw hot oil or lead on the pirates and raiders who would try to break the gate.
The construction of the monastery in this fortified form has been associated with the Cretan-Venetian families of Kornaros and Mezzo in Sitia. Even to this day the southern wing is called the Kornaros wing and the northern one is called the Mezzo wing, names indicating the sponsors of the monastery.

The monastery of Saint George Gorgolainis is located at an altitude of 480m, next to the village Asites, 24km south of Heraklion. It is built at a lush green area with huge platan, cypress and oak trees. Indeed, one platan and one cypress tree inside the complex have been declared as protected natural monuments by law.

The monastery, one of the oldest in Crete, has survived from several attacks during the Turkish occupation, as it housed the rebels of the area. Some of them were the chieftains Michael Korakas and Fragias Mastrahas, two very famous heroes throughout Crete. Inside the monastery you will see the statue and the tomb of Mastrahas, who was killed in 1868 while fighting against the Turks in Asites.

The monastery reserves the authenticity of the past, as the monks do not use electrical equipment during liturgy. The temple is dedicated to Saint George and is equipped with an artful iconostasis. Despite the fact that the temple is very old, the surrounding monks’ cells are quite new. You will get impressed with the old Venetian fountain, which till 1990 was equipped with an imposing marble lion, which was then stolen.

It is situated at an altitude of 480m., at a distance of 32 km from Heraklion and is considered to be one of the richest and largest monasteries of Crete. It was developed during the ottoman rule and it is dedicated to St George.

You can book your holidays to Renia